So this guy at our gym almost killed himself.

It was my friend Micah.

It started because the coaches at our gym noticed that we were all a bunch of lazy slobs and couldn’t do many pull-ups, so they started this pull-up program, which basically means we all have to do a lot more pull-ups these days.

For the most part at my gym, I still come in last place on everything. But one thing that has changed is that I’ve simply been there longer, and therefore feel this freedom, no, this urge, to act completely obnoxious, much like the way third graders behave when a new student moves in halfway through the school year.

So last Tuesday, while Micah’s wife was busy climbing a rope using only her right arm as a crowd cheered below her, and Benson was busy performing unassisted handstand push ups with a clap, Micah and I worked on our pull-ups while I barked orders.

We were supposed to be practicing our strict pull-ups, meaning just regular old pull-ups and not the kind where you thrash your body all around and look like you’re having a seizure trying to get above the bar. “Come on, Micah,” I ordered. “In three, two, one…” But instead of practicing the old standbys, Micah decided to practice the seizure pull-ups.

And since I am ever the helpful CrossFit member, I turned to the sweet girl beside me who has never said anything mean in her life (bless her heart), and said, “Micah’s not supposed to be doing that! – ”

And that’s when it happened: 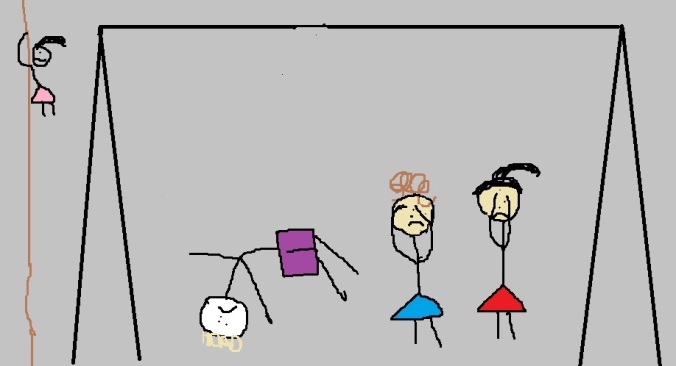 (I seriously had not even finished my full insult when Micah’s head hit the floor, which I think was fairly rude on his part.)

Micah laid there for a while staring up at us. The girl I’d tried to cajole into making fun of him asked him if he was okay. “Yeah,” he said, looking kind of dazed.

When I realized that nobody else was taking this opportunity to scold him, I stopped talking long enough to help him up, then yelled up to his wife (who was still one-armed rope climbing) “Micah fell and he wasn’t following directions!”

In the end, Micah lived, and so far we haven’t seen any signs of brain damage.

I’m thinking of asking our coaches if they’d like to bring me on board as a gym police of sorts. It’s one thing to correct someone’s form, but it’s a whole other thing to shout about it and bring it to the attention of others, and I really think I could help them here. I may ask for a laser pointer.

Until then, I’ll be hanging out on the pull-up bar.