We went on a cruise with our friends Jason and Heather. They’ve been married four years, and whenever Jason makes fun of Heather (he called her a sea hag one day on the boat deck) he grabs her arm and kisses it afterward.

Jason working on appropriate ways to tell his wife he loves her.

Speaking of communication techniques, Benson and I are mentoring two engaged couples right now. Throughout our marriage, we’ve read books, attended conferences, gone to classes all on marriage in hopes of not screwing ours up. So last week, we took our engaged couples hostage for an hour and a half and condensed down the most beneficial communication advice we’ve learned thus far and presented the ones that actually impacted our marriage.

If Benson comes up from the garage and complains about how his homemade keezer (keg-freezer – don’t ask) is leaking, I’ll say, “Oh bummer. I know it’s a mess to clean up.” Or if I tell him how excited I am that Chief didn’t pee in the dining room one day, I need him to be excited with me and not dwell on the fact that Chief instead pooped in the dining room.

It’s not so much that matching emotions is so great. Rather, not matching emotions can be pretty brutal. Think about the wife who’s frustrated that the plumber didn’t show up and the husband who, instead of being frustrated with her, complains that she wasn’t assertive enough on the phone with the plumbing company. (That’s the example they gave us in the marriage class and it always stuck with me.) 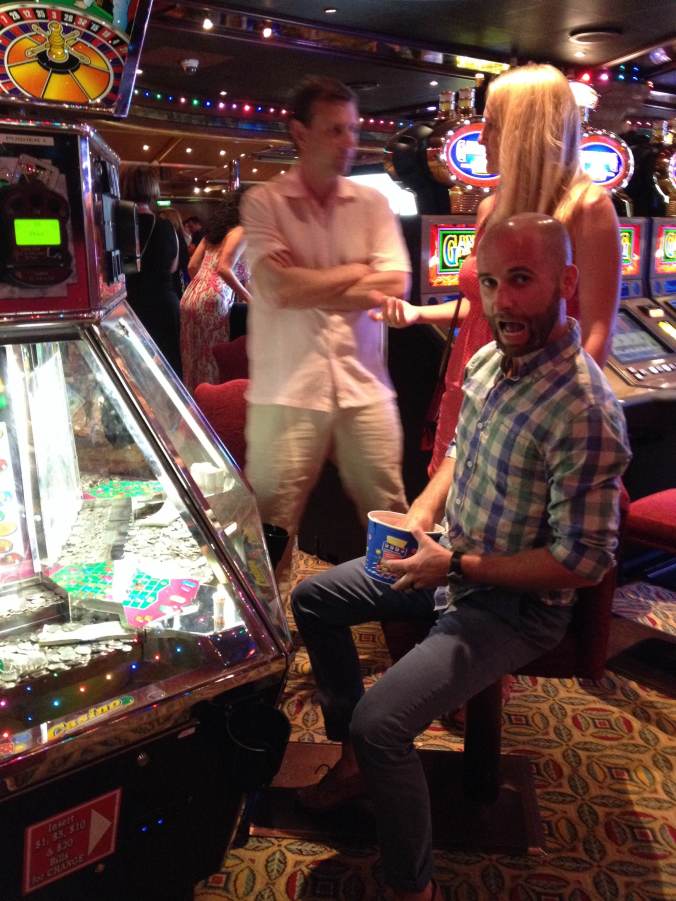 Benson picked up a handy gambling habit on the cruise. Note Jason and Heather in the background. (He’d just called her a milkmaid.)

He started with forty dollars…

One tricky thing about matching emotions is there are times when I don’t want to match Benson’s enthusiasm or dread or glee because I think he actually needs to be handling a situation differently than he is. When that happens, I try to broach the subject at a later time when we’re on neutral ground. That means I wait until the weekend to say, “Hey, about that gambling habit? I’m SO glad you ended up with four quarters and not zero quarters, but could we discuss cutting back a bit?”

Having a feelings conversation 1

Please raise your hand if you’ve ever vented to your spouse and instead of listening, your dear mate tried to fix your problem. Oh, look! EVERY SINGLE PERSON raised their hands. Let’s explore…

One night Benson and I were at dinner and he was telling me about a hard situation at work. Since I obviously hadn’t been paying attention to our past seventy-two marriage books we’ve read, instead of sympathizing with him, I basically told him he was all wrong, that things weren’t so bad, and then for good measure I added that he was being stingy.

Yes, I am aware of the irony of the fact that we are “mentoring” engaged couples.

Now then, are you ready for the magic words?

“I’m having a feelings conversation.”

That’s all he said. And I knew that in that moment, he needed me to listen, and hold his hand, and tell him I was sorry that things were frustrating.

The other day he called me from work and asked how my morning was going.

Me: It’s okay. I finally finished my invoicing for the month, so I’m glad that’s out of the way. It’s always a pain.

Benson: I bet there’s some invoicing software out there that would help you.

Me: It’s fine. The part that takes a long time is just finding the stuff I’ve written for people and making sure I label it correctly.

Benson: We’ll look into getting you that software.

Benson: Because the software –

Me: I’m having a feelings conversation.

Benson: I just thought you might want some soft-

Me: I’M HAVING A FEELINGS CONVERSATION! Oh my GOSH! I’M JUST TELLING YOU ABOUT MY MORNING.

So what I’m saying is it usually works.

And when we’re having a “fix-it” conversation, we’ll usually start with, “What do you think I should do?”/”Can you give me your feedback on something?” etc.

Give and receive repair attempts 2

Sometimes if we’re frustrated with each other, one of us will make a your mama joke and things just calm down.

The fancy name for this is a repair attempt. It’s like when a conversation might start to get heated, one person offers an attempt to deescalate the tension. The magic happens when the other partner accepts the attempt. So if I put my hand on Benson’s leg (in a loving way, not like a let’s get it on way) while we’re talking about an issue on the couch, he doesn’t knock my hand off, but instead puts his own hand on mine. It’s like a calming technique. We usually use humor, but other examples are things like saying, “Can we take a break and talk about this tonight at dinner?” or “I can see your point,” and nodding.

Repair attempts don’t work in heat of battle (please refrain from making your mama jokes if your spouse is crying). Instead, they work to ensure the conflict doesn’t turn into a battle in the first place. 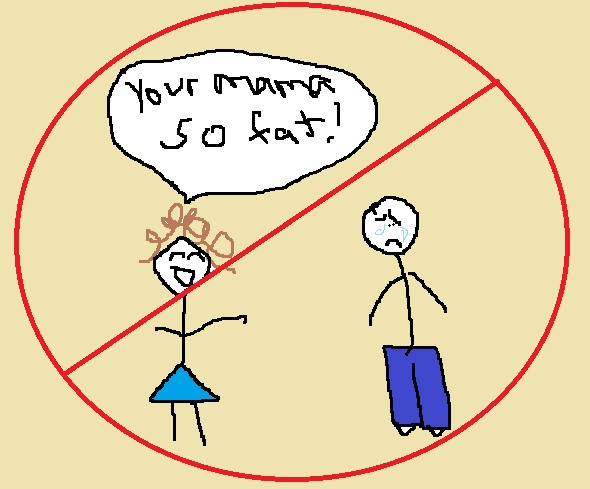 Daily Whenever We Need it Temperature Reading 1

Whenever we feel sort of disconnected or just bored, we go through this exercise. It can seem hokey at first, but it’s always been a really good springboard for conversation deeper than “Do you think our neighbor is a drug dealer?” for us. The book says to do it daily. We don’t.

In our first four or five years of marriage, if Benson said something, like, oh say, “What did you want to do for dinner?” I took it to mean, “You didn’t cook, did you, you sorry excuse for a wife? By the way, your hair looks ugly today.”

Then I read about how happy couples assume the best out of each other. So if a wife comes home from work all crabby, the happily married husband thinks, “She must have had a stressful day at work,” instead of “She doesn’t even love me enough to be happy when she sees me. This marriage bites.”

When I worked in the mortgage business (I bought toilet paper for the office), I was at a closing and the husband showed up with an expired drivers license. An up-to-date drivers license is like the ONE thing you have to show up with to a closing. We’d even sent him like seven emails reminding him. I figured his wife would be really mad, and maybe she was, but instead of attacking him she put her hand on his arm and said, “You’ve had a lot on your plate lately.” She didn’t assume he forgot because he didn’t care about the family or their finances. She assumed he forgot because he had a lot going on in his life. It was still a hassle to get it all figured out, but she didn’t let it become a rift in their relationship.

After learning about this concept, I decided to test it. For about a year if Benson said anything I thought to be ambiguous, I’d ask, “Did you mean x or y when you said that?” 98% of the time, Benson would look all perplexed and tell me he’d meant exactly what he’d said, and not some possible underlying jab. The other two percent of the time, he’d admit, that yes, he was being snarky (and then I threw dishes at him). After that year, I learned that he overwhelmingly meant only good by what he said, so I can now just assume that he means the best when he speaks. It really has cut down on the number of nit-picky little conflicts that used to pop up often.

“He chose this pose because he’s special, not weird.”

I don’t really have a conclusion. But I would like to hear if you have any of your own tips and tricks for communicating that do not involve burning cigarette butts into your spouse’s forearms.

1. Saving Your Marriage Before it Starts, by Les and Leslie Parrot

2. The Seven Principles for Making Marriage Work, by John Gottman

(Anything not referenced was learned from listening to other people who’ve been married longer than us talk about what’s worked for them. (Or it’s from a book and I can’t remember which one.))

PS – Jason and Heather eventually made up and performed the chicken dance together (because apparently that’s something people do on cruises. In the middle of dinner.)