The Sort of Kidnapping, Part I

I guess this is what we get for that one time we kidnapped those children in Florida.

We had one goal: Buy groceries.

I had already located a food store online. Eventually, I’d love to feel all hip purchasing my mangoes in an open air market where I have to haggle down the rupees prices, but it was only day 2. We needed easy. We hired a private driver because we’d heard those scary stories about taxi drivers holding tourists hostage in the slums of Mumbai.

As soon as we pulled off the grounds of the apartment, it was full on INDIA. I’m talking rickshaws, people yelling at each other in the streets, men selling ketchup on the side of the road (there’s so much ketchup here!), oh look – a cow lounging on the sidewalk! Mopeds, beggars, some guy at our window waving peacock feathers. The pollution made my eyes water.

Guys, this place is insane.

We told the driver where we’d like to go, to which he replied in a thick Indian accent, “Oh yes, nice store. I drive you round, show you sights.”

“We’d just like to got to this grocery store, please.”

Eventually Driver actually did deliver us to the grocery store we’d requested. We asked him to pick us up in an hour. We wanted to walk around a bit since we were in the area we plan to live once we move here.

“How about we walk over there?” Benson suggested. I clutched my purse like a mad woman, we clasped hands and set off. Our very first walk on the streets of Mumbai.

But then we came to an intersection. I watched as one hundred cars and motorcycles and rickshaws drove by and glanced around for the crosswalk. “Let’s just follow them!” Benson announced and pulled me right up behind two men who straight up just WALKED ACROSS THE STREET IN THE MIDDLE OF ALL THE TRAFFIC.

I picture kindergarten teachers here instructing children on traffic safety. “Now what do we do, children, when crossing the busy busy traffic?” And then all the kids throw their fists in the air and shout in unison, “GO!”

I felt fairly protected since we were nearly pressing our chests against the Indian men’s backs. They seemed pretty lackadaisical about the whole thing and I borrowed their confidence.

Once across the street we saw signs for a 5K taking place that day and realized the race had just ended. The street had closed down and we walked through groups of happy Indian men dancing in their medals and track shorts. Women danced in a separate group, cheering each other on. We were the only two white folks there and nobody so much as glanced twice at us. It was really quite fun. I loosened the grip on my purse. We can do this. We can live in India! 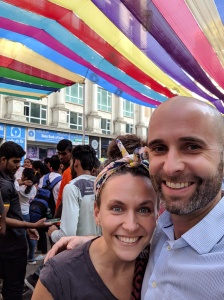 After smiling at our future neighbors for a while, we checked the time and decided to get to shopping.

The lady positioned outside the store had to zip tie my purse closed before we could enter. Then, I had to walk through this metal detector they had set up on the sidewalk. I figured it was because I had a long skirt on or something because they didn’t make Benson pass through. Once in the store (imagine a large US gas station and fill it with three hundred Indians and two bewildered Americans who can’t read Hindi) this man pointed for Benson to stand on top of a box to be frisked.

Okay, so this is how they do it. You need bananas, ma’am? Well first go through this airport security and then hold tight while we pat down your husband’s crotch. Okay, now right this way.

The aisles were too crowded to get the little shopping cart down them, so Benson would position himself at a place where I could see him lest I get swallowed by the crowds while I searched for anything resembling food that I’m used to. At one point I had to make my body as flat as possible, even holding my head sideways against some strangely small paper towels just so I wouldn’t be crushed. We finally found some bread (called “brown bread”), salt that looked like powdered sugar and packaged in a bag—

—and even a little produce section where I bought some weird looking carrots and a parcel of something called mung beans.

At the register Benson held up an American Express card and asked if they accepted it. And that’s when we got our first head wobble. I’d heard about the Indian head wobble: this jiggle of the noggin Indians do to indicate they hear you. What we haven’t figured out is if it ever means yes or no. Because she was doing the head wobble in response to a question. Benson glanced at me. I shrugged. “Just try it,” I mumbled, nodding toward the credit card machine. Benson timidly placed the card in, keeping his eye on the cashier, silently asking permission.

The card worked! So now we have one reference point indicating a head wobble can mean, “We do, in fact, accept American Express.”

We then headed back to meet Driver, which involved crossing the street again. This time there was nobody to follow. Benson just tugged me into the street and I seriously prayed aloud, “Oh God!” as we dodged the motorists. Y’all, I’m not even kidding – I was so scared my knees got wobbly. I tried holding the brown bread on my bleeding side so it’d buffer the impact, as I knew death was near.

We made it. I have now successfully crossed two Indian streets and purchased groceries and feel someone owes me my own medal. The driver waved to us and we climbed back in the car with our cloth bag of mung beans.

It had actually been a pretty good first hour on our own in this new city, but what it showed us is that nothing is familiar to us here. Every single thing must be learned: how to cross the street, how to buy bread, how to talk to a driver.

Turns out, we learned that last bit the hard way.

PS – anybody out there know how to cook mung beans?