The Sort of Kidnapping, Part II

“Very nice sights,” Driver said again. Then he said about twenty-five other words with such a thick accent we couldn’t understand. He pointed to various spots on a map he’d unfolded. “I drive round, show.”

Benson looked over at me. “You wanna drive around for a little bit?”

I was still so shaken from crossing the street I just said, “Okay.”

Benson nodded to Driver. “Okay, we’ll drive around for a little bit. Maybe just an hour.”

Yeah, an hour. That sounded good.

And off we went. I picked up on the fact that we were headed to South Mumbai, which I figured, based on the map, was about ten minutes away. Once on a main road again, all I could hear was honking and honking and honking. I decided to count how many seconds between honks.

You wanna know what number I got to?

We drove past slums on the ground and slums lodged into decaying gray buildings. Garbage littered most surfaces. Stalls resembling forts boys might build in the woods from random bits of construction material lined the streets. Three men sat shoulder to shoulder in one, receiving haircuts from three other men. A old woman squatted on the sidewalk by a carpet piled with shoes while a younger woman peered down, deciding which ones to try.

“Is this South Mumbai?” I asked.

“No no. Fifteen minutes.”

Driver pointed out businesses and buildings to Benson, whom he called “Sir.” I’ve noticed the men don’t address me here. Instead of listening, I stared out the window.

Women in magenta saris, women clad head to toe in black, only slits for their eyes. A young girl riding in the rickshaw next to us, cream lace wrapped tight around her hair, mouth and nose, beautiful brown skin and eyelashes peeking out.

I’ve sat in the mud hut of an African family who sleeps with a goat tied to the sole wooden post of their home at night and I’ve never experienced culture shock like this.

I glanced around at all the traffic, all the people, all the commotion. “This isn’t busy?” I asked.

“No, this South Mumbai. I drive you five hours today.”

Driver pulled over and ushered us out. We followed like stupid sheep, trailing after him up some stairs onto a platform. A one-legged, shirtless man with the darkest brown chest and arms mumbled to us as we climbed the steps. Driver motioned to a building behind us and offered to take our picture. We didn’t feel like smiling. We felt like we’d been kidnapped. We smiled anyway. 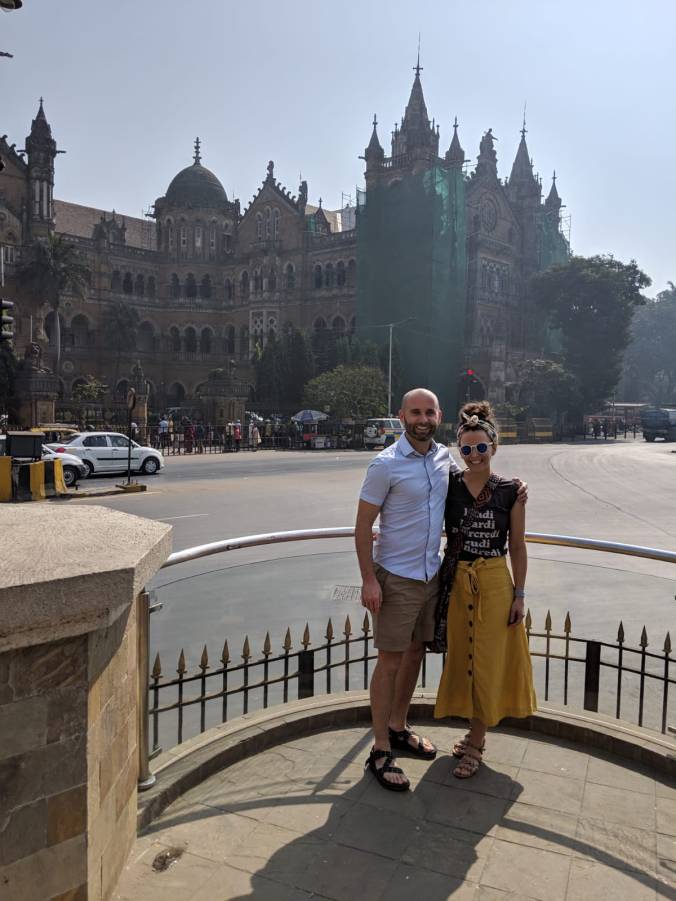 We walked back to the car and Driver got in a shouting match with a policeman. I began to question my life decisions. Why didn’t we move to the suburbs like normal people do?

Driver returned, unphased by the policeman.

Shop? No, we didn’t want to shop anymore.

“No, that’s okay,” Benson said. “We just want to stay in the car.” He attempted to explain jetlag. “NO SLEEP! ARRIVED AT TWO A.M.!”

We pulled up to that stupid shop. Benson looked over at me. “Let’s just go in,” he said, resigning himself to our captor. I got out of the car and watched Driver smile to the doorman. I seriously had no idea where we were or what kind of shop this was. Once inside, I realized what kind of shop it was: the kind drivers like ours drop off rich Americans in hopes they’ll spend money on golden saris and Turkish rugs so that said drivers can get a kickback from the shop owner.

I trudged across the marble floors of the air-conditioned space. Benson pointed to a mosaic table and said that something like that would be nice in our apartment. I tried to feel happy.

“We ship,” the shop owner said.

My head moved in the general direction of some tunics. “We have to match your eyes,” Shop Owner offered.

“I want to go back,” I said to Benson. I think I meant the apartment, but I sort of meant my beloved Houston home, and I also sort of meant my brother’s house outside Atlanta with my messy-haired nieces and nephews and the smell of coffee and sound of my sister-in-law’s Spanish accent. And in a way I meant home in Heaven with the Lord if I’m honest.

We stepped out of the store. A young girl begged Benson for money, pressing her arms against the glass as he closed the door.

Driver finished his jovial chat with Store Owner and Benson said loudly and cheerily, “We’d like to go back to the apartment” about six times. We made vague allusions to letting Driver finish his tour next weekend and said again, “YES, PLEASE JUST TAKE US TO THE APARTMENT NOW.” Finally, he relented, repeating to us that we’d like to go to the apartment and I watched the slums pass us by in reverse order.

Once “home,” we reached for one of our comfort activities, the Scrabble board we’d packed. Then we realized the letter tiles had been stolen from Benson’s checked luggage (along with his jump rope and Bluetooth speaker). And that’s when I lost it. I cried for the next twelve hours.

Between my sobs, I grabbed my Bible and devoured the words in a way I never have, like my life was at risk if I didn’t get nourishment from its pages. And I’m realizing that God is doing big, gut-wrenching, idol-casting work in this heart of mine. And that’s never fun.

But it’s always worth it.